Today's Wild Card author is:
John Little
and the book:
Catherine's Gift: Stories of Hope from the Hospital
Monarch Books (March 4, 2010)
***Special thanks to Cat Hoort of Kregel Publications for sending me a review copy.*** 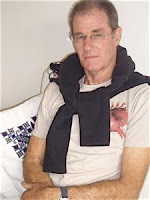 John Little spent 25 years working as a reporter and producer in television current affairs before becoming a full-time author. He has written eight books, including The Hospital by the River (with Dr Catherine Hamlin); Down to the Sea; Jem, a Father’s Story; Christine’s Ark; and Maalika (with Valerie Browning). He lives with his wife, Anna, and son, Tim, on Sydney’s northern beaches.

It’s the rainy season in Addis Ababa. The day begins with a promise. At the hospital by the river, patients who are not confined to bed throw off their woolen shawls and gather in the sun to gossip. The girls groom one another’s hair, sew and bicker and joke. Some, perhaps speaking a rare tongue, sit by themselves on the low stone wall by the outpatients department, or squat on the ground watching the activity. In this self-contained little world, walled off from the chaos of the city, there’s always something to see – new patients arriving, mud-stained, stinking and weary after travelling on foot over flooded tracks, vehicles bringing medical supplies, ferenji visitors from another planet, gardeners tending the lawns and flower beds, workers regularly hosing away the puddles which gather under the waiting patients.


These are peasant women. The seasons rule their lives. They savor the morning warmth, for they know that by midday black clouds will begin to form over the hills which ring the city and the thunder will grumble like a cranky old man leaving a warm bed. At two-thirty the rain begins – they could set their watches by it if they owned such things – and it does not stop until late at night.


In the highlands where many of these women come from, the rains can cut off villages for weeks on end. When doctors Reg and Catherine Hamlin first began treating the women half a century ago they could always count on some respite at this time of year. But for the past few years the rainy season seems to have made no difference. Is it because there are more cases than ever? Or just because the hospital has become so well known? Whatever the reason, every day up to half a dozen women arrive seeking help.


Sometimes they are alone – bewildered and frightened by the brutal indifference of the city. Sometimes a friend or relative has come with them. A few, with injuries so severe they are unable to walk, are carried in. They come from the desert, from remote highland villages, from the plains and the rainforest. They speak 80 different languages. They are Orthodox Christians, Muslims, Animists, or sometimes a mixture of faiths. They all have one thing in common – they are suffering from the medical condition known as obstetric fistula.


It is a cruel affliction. Ethiopia has its lepers and cripples, as does any poor African country. The diseased and the lame and the mad are on any street corner for all to see. But if there is a scale of human misery, the fistula women are up near the top. They believe they are cursed by God. And you have to wonder what God had in mind when he allowed a woman’s most cherished act, childbirth, to produce this outcome. No matter where they live, 10 per cent of all women will experience some kind of problem, such as obstructed labor, during childbirth. In the west they simply go to hospital and have a caesarean section or a forceps delivery. For a peasant girl in a remote Ethiopian village it’s not so easy. She will squat in her circular hut, or tukul, sometimes for days, trying to force the baby out. After a couple of days the baby inevitably dies. The prolonged labor, with the baby stuck in the birth canal, may cut off the blood supply to parts of the mother’s body. The tissue dies, leaving a hole, or fistula, in the bladder. Because they are so offensive to be near, fistula sufferers are invariably divorced by their husbands and banished from their village. Theirs are lives of loneliness and despair, often in some ruined dwelling away from everyone else, or they may be forced to beg for a living in the town. We are not talking about some minor medical curiosity here. There are 200,000 fistula sufferers in Ethiopia; two million throughout the world.


Amid the comings and goings, some of the girls may notice a tall, slim, grey-haired woman wearing a white doctor’s coat, passing through the outpatients department into the main ward. Dr Catherine

Hamlin is 83 now. She was 35 when she and her husband, Reg, also an obstetrician/gynecologist, first came to Ethiopia and saw the plight of the fistula women. ‘Fistula pilgrims’, Reg called them, on account of the formidable journeys they made to seek help. Since then the hospital has restored more than 32,000 from wretched despair to joyous new life.


Reg died in 1993 but Catherine carries on, and at an age when most women are content just to reflect upon their memories, she is working as hard as ever. She is intimately involved with every aspect of the hospital, still doing rounds, still operating.


At the nurses’ station inside the ward she consults her colleagues about tomorrow’s list. There are seven cases of varying degrees of difficulty. She pores over the notes, contained in green cardboard folders. They give a brief history of the patient – how many days she was in labor, where she came from, how she got here, how many previous children she has borne, any medical information that will affect her management. The doctor who did the initial examination has drawn a diagram showing the location and size of the fistula. Catherine chooses her cases.