Review: Fix-It and Forget It Cookbook

We aren't gourmet cooks at this house.  We have two adults who work full time and three kids who eat, well, like kids.  They don't want fancy sauces, exotic ingredients or heavy spices.  The slow cooker has long been a work horse in my kitchen so I grabbed Fix-It and Forget-It Cookbook: 700 Great Slow Cooker Recipes (Fix-It and Forget-It Series)

Generally speaking, my family has been blessed with enough money for necessities but not enough for the fancy luxuries.  This summer (and last summer too) that changed for a short time.  I've been able to afford a full time household staff to clean, cook and do yard work.  No, no neither my boss nor my husband's handed out big raises; rather, my teenagers got out of school and had plenty of free time on their hands.  As a mother, it is my duty to fill that time.  As would be expected for what I'm paying them (well, I guess if you add up everything they are costing me, they are a very expensive household staff, but the fact of the matter is, the law says I have to feed them, so I might as well get some work out of them), the quality of the work may not always be to professional standards, but they are getting better.

I'm really pushing cooking this summer (they had major cleaning lessons last summer) which brings me back to this book I'm reviewing.  It is filled with recipes that my kids will eat and that my teens can cook. 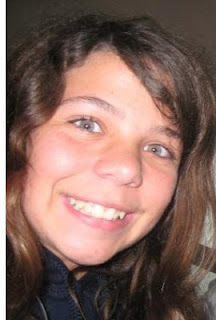 Isn't my daughter cute?  Well, shortly after this book showed up at my door, I looked in the refrigerator and noted that we had pork chops that needed to be eaten.  I checked Fix-It and Forget-It Cookbook: 700 Great Slow Cooker Recipes (Fix-It and Forget-It Series)

for pork chop recipes and found quite a few.  After  examining what was in my pantry and considering what the crew would eat, I told my daughter what she was making for supper.  She found the directions easy to follow (well, she said she followed them, but I wasn't home so I don't know if she did, or just said she did, but this book is dead simple and she's a bright kid) and the pork chops were good--tender and not dry but cooked through.  The recipe called for adding mushroom soup and rice to the crockpot, along with the pork chops.  When I got home and looked at the crock pot, it looked more like soup than a casserole.  I added a cup of minute rice a absorb the excess liquid and the end result was a tasty side dish.  In short, if she followed the directions, this recipe need either less liquid or more rice. 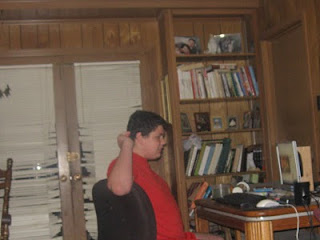 for something to do with boneless skinless chicken breasts, and to go to the store for anything he needed that wasn't in the pantry, he first complained "This says it takes six to seven hours to cook stuff" as if he'd have to attend to it for those hours (which would interfere with his computer time), I told him to read the recipe and follow the directions--and to note the title of the book.  He decided on Teriyaki Chicken (might have had something to do with the bottle of teriyaki sauce in the refrigerator).  The recipe called for putting the sauce, the chicken and a can of pineapple in the slow cooker and cooking.  Since he didn't like pineapple (and there was none in the pantry), he skipped it.  In the end, the chicken was tasty, but a bit dry.  I don't know if adding the pineapple would have helped, or not, but since I like pineapple, if I make it, I'm going to use it.
The recipes are for real people, not gourmet cooks.  They use ingredients like cream of mushroom soup, onion soup mix, packaged seasonings and bouillon cubes.  Some seem repetitive, but most seem to be things families with kids would eat and they seem easy enough to get into the crockpot and onto the table.  I foresee my  household staff becoming very familiar with this book by summer's end.
Thanks again to the folks at FSB Media for my review copy.  To get a flavor for the recipes offered, check out the author's web site.
Posted by RAnn at 11:55 PM

Email ThisBlogThis!Share to TwitterShare to FacebookShare to Pinterest
Labels: Author: Phyllis Pellman Good, Title: Fix It and Forget It Cookbook