is an 800+ page book giving not only the recipes that define "American" cookery (as opposed to French, Irish, Italian etc.) but also the history of American cuisine along with basic cooking tips--like how to cook various vegetables.
Each two-page spread has recipes on the outside of the pages while the inside of the spread is dedicated to giving the instructions for the recipes or telling the reader about the recipe or about the history of that food.  The book was originally published in 1972 and besides a new preface, no revisions are noted.
I was asked to prepare a recipe as part of this review, so I looked for something relatively short (since I'm not crazy about typing) and something my family (including three kids) would eat (since I'm not fond of wasting food).  I picked a Corn Pudding recipe on page 514.
Ingredients:
2 eggs
1 teaspoon salt
1/2 teaspoon freshly ground pepper
1 Tablespoon grated onion
1 teaspoon sugar
2 tablespoons butter
2 cups milk (since this is a 1972 cookbook and since I figured the fat might be important to the recipe, I used whole milk)
1 can (1 pound) cream-style corn. (Since the can I had was 14 1/2 ounces, I added a bit from a second can. 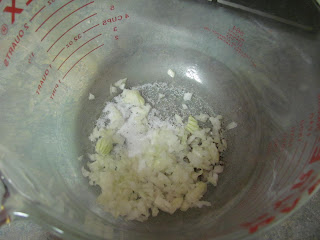 Directions:  (direct quote from book so you get to know the style)

This recipe for corn pudding, one of many versions, is from a family who have lived in Florida for generations.  It uses canned cream-style corn, which many people favor for the pudding.  Beat the eggs with the seasonings.  Heat the butter and milk, and fold into the egg mixture.  Add the corn and mix thoroughly.  Pour into a shallow 1 1/2 quart baking dish, set in pan of water and bake at 325 degrees about 1 hour or until just set.  Serve from the baking dish. 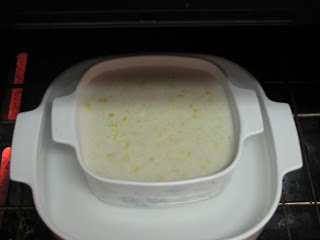 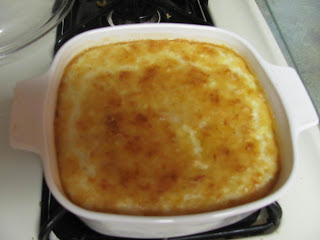 I thought it looked runny after an hour so I cooked it about 10 minutes more, and it didn't look much if any firmer.  Here is what it looked like on the plate: 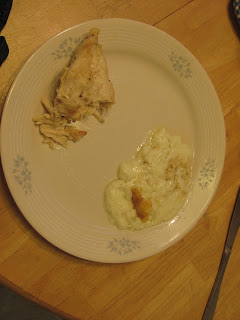 While there were definitely custard-like parts, the overall pudding was very watery.  My kids didn't like the look of it and two would barely taste it.  The other said it looked like I went to a lot of trouble to make something that tasted like corn.  I don't know if I didn't get the milk hot enough (was I supposed to be making a custard with the milk and eggs?) or if the recipe was supposed to be like that.  I was afraid that if I got the milk too  hot, I'd end up with bits of scrambled eggs.  My husband and I liked the taste of the pudding, but didn't care for the appearance.

Overall the recipes in the book appear to be the type of food real people make using ingredients found in the average grocery store.  Most do not appear to be complicated to assemble, but the directions aren't always as clear as they could be (like above).  While there are a few line drawings, there are no photographs of the food.

I'd like to thank Anna Balasi at Hachette Books for sending me a complimentary review copy.
Posted by RAnn at 3:24 PM