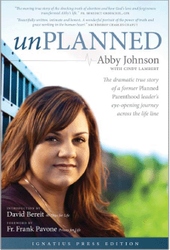 Unplanned by Abby Johnson
About the Book:
Abby Johnson quit her job in October 2009. That simple act became a national news story because Abby was the director of a Planned Parenthood clinic in Texas who, after participating in her first actual abortion procedure, walked across the road to join the Coalition for Life.
Unplanned is a heart-stopping personal drama of life-and-death encounters, a courtroom battle, and spiritual transformation that speaks hope and compassion into the political controversy that surrounds this issue. Telling Abby's story from both sides of the abortion clinic property line, this book is a must-read for anyone who cares about the life versus rights debate and helping women who face crisis pregnancies.
My Comments:
I haven't read this book yet but it sounds like a real winner.  I just don't get why, for so many people, the litmus test of whether you are for women's rights, is whether you support a woman's right to kill her child.  Needless to say, I don't. Does that mean I don't support the rights of women to be equal to men in the public sphere?  Of course not.  I wonder how many abortions there would be if men had no say in that decision--in other words, I wonder how many abortions happen because the man who impregnated the woman suggests abortion as the "solution" to their problem?  I wonder how many happen because someone's father doesn't want to be embarrassed with a pregnant teenager?  I wonder how many babies wouldn't be killed every year if all the involved men said "It is your choice, you can have the baby or abort, and I'll stand behind you financially and emotionally either way".  It really would be an interesting subject to study.  Is abortion about a woman's right to choose, or about a man's ability to escape responsibility?
Posted by RAnn at 9:39 PM