--- 1 ---
I went to parent orientation Tuesday and had to listen to the plan of what the school would do in the case of a Newtown type incident.  That goes along with the lockdown drills, fire drills, and tornado drills.  When we lived in California we had earthquake drills (curl up under your desk) and every school I went to had fire drills, but the rest?  We also heard about the evacuation plan.  I don't ever remember having one of those either, but on the other hand, many of the problems suffered in New Orleans after Hurricane Katrina were as much a result of lack of planning as a result of the storm itself.

--- 2 ---
My daughter is getting to be a bigger kid.  Her classroom is upstairs this year.  It is her last year wearing a blue sweatshirt; the middle school kids wear gray.  Of course, last year's sweatshirt doesn't fit and there were no used ones available at the sale. 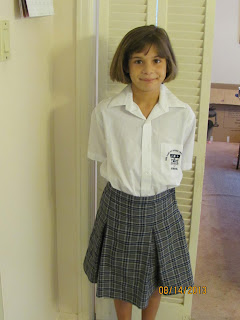 --- 3 ---
Wednesday was the first day of school.  I made cinnamon rolls to celebrate--and so no one would accuse me of not feeding my child breakfast (of course there is always plenty of food in the house; Ms. Picky just doesn't want what we have).

--- 4 ---
Thursday was a Holy Day.  I'm a heathen; I don't like them.  Nothing against Mary; nothing against the Assumption, it's just one more thing to do on an already crowded day, and with one kid in Catholic school, either the rest of the family splits up, or someone either takes off or rushes at lunchtime to go during the day or the Catholic school kid has to go twice, since she's too young to leave home--and no, she doesn't want to go twice. (talk about a run-on sentence)

--- 5 ---
We ordered college textbooks this weekend.  Talk about racket.  We paid over $50 each for used books; new ones were twice that.  Hopefully we'll be able to get some of that back at the end of the semester by selling them.

--- 6 ---
In another week we take my daughter to college for the first time; and she's the first of my kids to leave home.  I remember when I was in her shoes.  I was excited, scared, hopeful, happy, sad... a whole jumble of mixed emotions.  I have a lot of those same emotions about seeing her off.  I'm excited that she is able to go where she wanted to go.  I'm scared that she might not live as I want her to, especially with regard to churchgoing.  I'm hopeful that she will.  I'm happy that she has a nice scholarship at a school she likes and sad that she's leaving, but glad she is independent enough to want to go.

--- 7 ---
I'm hoping that having the college kids leave town and the high school kids going back to school will open up a job for my autistic son.  We've been looking for something for over six months (actually closer to two years but that's a whole 'nother post, and not a quick take) and the guy we are working with told us in May that summers are a hard time to place the handicapped because so many high school college kids want those low wage jobs.  My son has been in a job training program for a year now--I pay them to make him work.  I think he's gotten as much as he can from the program, but I don't want him just sitting at home all day either.


For more Quick Takes, visit Conversion Diary!
Posted by RAnn at 1:00 AM