Seven Quick Takes: Off to College

--- 1 ---
Well,  my nest is a little emptier.  We took my daughter to college on Saturday.  She is now a proud Freshman at Northwestern State University of Louisiana

--- 2 ---
Her siblings wanted to see the school  (it is four hours from here) so we made a family trip of dropping her off.  Here you can see the packed van and her siblings: 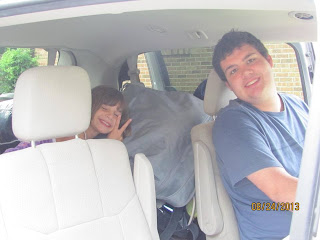 --- 3 ---
After driving up there and moving her stuff into her "dorm", we headed to mass.  Take a look at this "dorm"; actually it is a four bedroom apartment housing four girls. 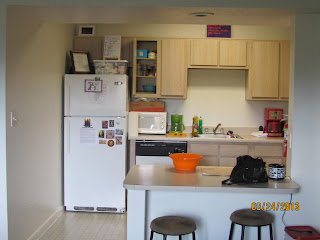 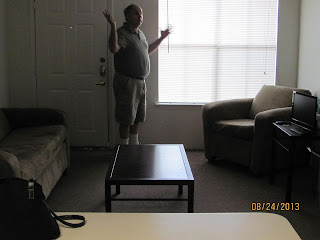 --- 4 ---
The church is across the street from the campus.  The crowd at Saturday night Mass on move-in day was on the gray side but the  priest seemed nice and invited her to come back.  The feed the kids for free on Wednesday nights.  I hope she goes.  After Mass we went downtown to get a bite to eat.  I had a famous Natchitoches meat pie.

--- 5 ---
Then it was off to the grocery store to buy snacks, toiletries and cleaning supplies.  One last chance to shop with Mom's credit card.  Then we headed for our hotel and left her to play with her friends. 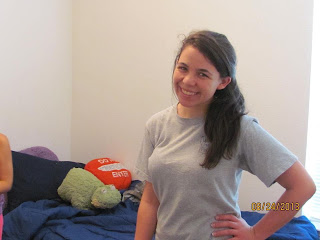 --- 6 ---
They have been recruiting her for the Louisiana Scholars College since they started recruiting her for the school.  Her initial answer was "No, I've spent seven years at Haynes (magnet school for bright kids) and I want out of that environment (in other words she wanted to be the smartest kid in the class, like she was in elementary school).  When she went up for orientation this summer they worked on her some more.  While housed on the university campus, the Scholars College program is largely separate from the rest of the school.  They have interdisciplinary great books core classes taught seminar-style in a building largely reserved for Scholars College.  Even their upper level courses are largely separate from the other students, especially if they are liberal arts majors.  She wanted to major in history and is really exactly the type of student they are looking for.  She still said "no" this summer, but she was wavering.  Her roommate decided this summer that she would do it, and Scholars College had some events before the rest of the folks got there, so she had been there a couple of days by the time we got there and was telling my daughter how awesome it was.
--- 7 ---
Sunday night there was another Scholars function and her roommate emailed the director and asked if my daughter could come.  The director said yes, but that she wanted to meet with my daughter before hand.  By the end of Sunday, I was the mother of a Louisiana Scholars College student.  She is taking Texts and Traditions, which is a five hour interdisciplinary course which this semester focuses on the Ancient World.  She is also taking a four hour course in European art and politics from 1800 to present, and a three hour class on gender in literature.  A Latin class and orientation round out her schedule.  She says she loves her classes, and they certainly sound interesting to me.  She'll be doing a lot of reading and writing.  Her dad wasn't happy about the gender in literature class.