Why This Title: Review and Discussion on The Nature of Fragile Things 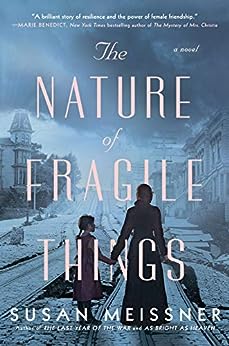 The Nature of Fragile Things

Sophie Whalen is a young Irish immigrant so desperate to get out of a New York tenement that she answers a mail-order bride ad and agrees to marry a man she knows nothing about. San Francisco widower Martin Hocking proves to be as aloof as he is mesmerizingly handsome. Sophie quickly develops deep affection for Kat, Martin's silent five-year-old daughter, but Martin's odd behavior leaves her with the uneasy feeling that something about her newfound situation isn't right.

Then one early-spring evening, a stranger at the door sets in motion a transforming chain of events. Sophie discovers hidden ties to two other women. The first, pretty and pregnant, is standing on her doorstep. The second is hundreds of miles away in the American Southwest, grieving the loss of everything she once loved.

The fates of these three women intertwine on the eve of the devastating earthquake, thrusting them onto a perilous journey that will test their resiliency and resolve and, ultimately, their belief that love can overcome fear.

It's been a long time since I sat down after work and read a book cover-to-cover in one night (and early morning) but that's exactly what I did last night, and it was time well spent.
Set in San Francisco in the early 1900's, just prior to and just after the great earthquake and fire, the book follows Sophie through the days of her marriage to Martin and through her relationship with Martin's daughter "Kat".  One of my secret vices is trashy Kindle Unlimited romances and a bunch of them are "mail order bride" books--the spunky (or fearful) woman from back east travels across the country to marry a man almost sight unseen and of course before the end of the book they fall in love.  This book is a reminder that the reason many of these women answered those ads was lack of other viable options.  While I'm sure many of those relationships were at least somewhat satisfactory to both parties, I'm also rather sure that some of the men weren't completely honest about their circumstances and that others were abusive in one way or another.
I find the title of the book to be interesting:  The Nature of Fragile Things.  With most books I'm pretty sure how the title relates to the story before I start reading, or, if not then, by the time I'm done.  With this one, I'm pondering.
What is the nature of fragile things?  Well, they break, that's practically the definition.  Usually if I think of something "fragile" I think of something with some value, even though it is easy to break.  I just googled "fragile" and it means easily broken or damaged, flimsy or unsubstantial, easily destroyed or (of a person) not strong or sturdy, delicate and vulnerable.  So how does the title relate to the book?
While I'd never call Sophie "fragile", her marriage to Martin certainly was.  We don't consider buildings to be fragile, but the earthquake broke many of them.  Sophie develops a relationship with Kat that is anything but fragile.  Kat's mother has tuberculosis and is very fragile--but also very strong.  Sophie also develops a strong relationship with the woman mentioned above.
Is this a book about being broken?  I don't think so.  Actually I found the women in the book to be strong, despite their circumstances.  The three main adult female characters were all fooled by Martin, so in some ways I suppose he broke all of them, though he didn't end up getting what he wanted from any of these three.
If you read the book, why do you think it has the title it does?
I'd like to thank the publisher for making a review copy available via NetGalley.  Grade: A
Posted by RAnn at 12:52 PM