Short Review: The Girl Who Escaped from Auchwitz 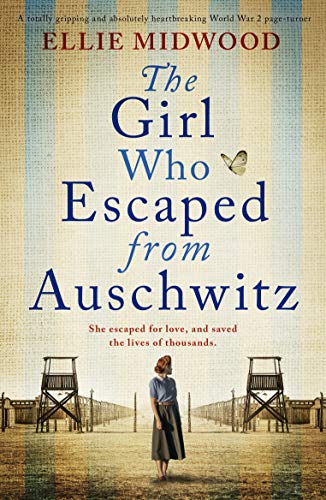 The Girl Who Escaped from Auschwitz

Nobody leaves Auschwitz alive.
Mala, inmate 19880, understood that the moment she stepped off the cattle train into the depths of hell. As an interpreter for the SS, she uses her position to save as many lives as she can, smuggling scraps of bread to those desperate with hunger.
Edward, inmate 531, is a camp veteran and a political prisoner. Though he looks like everyone else, with a shaved head and striped uniform, he’s a fighter in the underground Resistance. And he has an escape plan.
They are locked up for no other sin than simply existing. But when they meet, the dark shadow of Auschwitz is lit by a glimmer of hope. Edward makes Mala believe in the impossible. That despite being surrounded by electric wire, machine guns topping endless watchtowers and searchlights roaming the ground, they will leave this death camp.
A promise is made––they will escape together or they will die together. What follows is one of the greatest love stories in history…

I read the Prologue and then the last chapter.  The title made me think there was a happily ever after.  There wasn't, and I didn't want to read the rest.  Yes, I know, few people made it out of Auschwitz, that's reality.  Yes, it was millions of individual people who were killed there, not a bunch of statistics.  Still, reading about and learning to care for people who are going to die a horrible death is not how I choose to spend my spare time.  Your mileage may vary.
Thanks to the publisher for providing a review copy of the book via NetGalley.  DNF.