Review: When I Found You 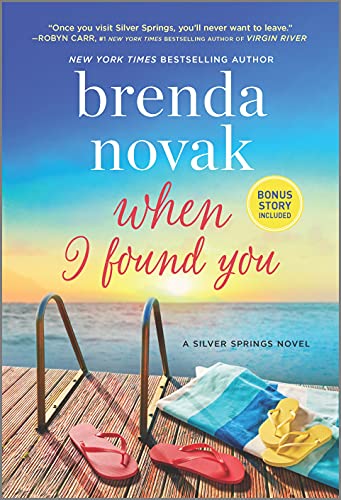 When I Found You

After everything she worked for is destroyed, pediatrician Natasha Gray is determined to build a new life. Divorced, bankrupt and suddenly a single mom, she’s ready to start over in Silver Springs—on her own. She certainly doesn’t need help from Mack Amos, the man who’s already broken her heart twice.
Although Mack has had feelings for Tash since they first met, too many things have stood in the way. He’s always given her the support she needs, though, and he’ll do the same now. Even if the desire he wrestles with threatens to undermine his intentions…
But her heart is not the only reason Natasha wants to keep Mack at bay. More time in her life means getting closer to her son, which could lead to a revelation neither of them is ready to face.

Fans of Brenda Novak will know what I mean when I say this book is Silver Springs meets Whiskey Creek.  Natasha is starting over in Silver Springs, but someone else wants a new start too--Mack Amos, one of the Amos brothers from Whiskey Creek.  While the story of how Natasha got to this point doesn't really ring true, I liked her and her son.
Those familiar with the Whiskey Creek series will remember that when the Amos patriarch was released from prison, he returned home with a wife in tow--and that wife had a daughter, Natasha.  Mack's feelings about Natasha weren't brotherly then and certainly aren't now-over 10 years after the Whiskey Creek books.
Both Mack and Natasha have been through some rough times lately, but I loved watching them move to happily ever after.  Like the other Whiskey Creek books, the extended cast plays an important part.  Mild Spoiler:  The big Whiskey Creek secret comes out.  Still, I think you could enjoy the book even if you never met any of the Whiskey Creek characters.
I'd like to thank the publisher for making a review copy available via NetGalley.  Grade: B.
Posted by RAnn at 2:37 PM

Email ThisBlogThis!Share to TwitterShare to FacebookShare to Pinterest
Labels: 2021 Book Review, Brenda Novak, Grade: B, NetGalley, When I Found You