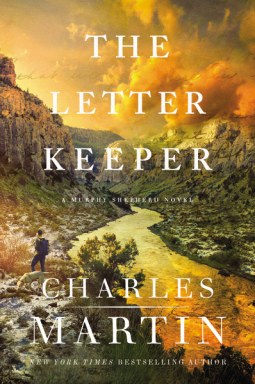 He shows up when all hope is lost.

Murphy Shepherd has made a career of finding those no one else could—survivors of human trafficking. His life’s mission is helping others find freedom.

But then the nightmare strikes too close to home.

When his new wife, her daughter, and two other teenage girls are stolen, Murphy is left questioning all he has thought to be true. With more dead ends than leads, he has no idea how to find those he loves.

After everything is stripped away, love is what remains.

Hope feels lost, but Murphy is willing to expend his last breath trying to bring them home.

I almost quit about 10% into the book because I couldn't figure out what was happening or how the characters fit together. However, I kept reading and in the end, I can't say I wasted my time, but no, I will not be reading the next book in the series.

The story is told in the first person by Shepherd, and it follows two timelines--what is happening now, and what happened in the past to bring him into this line of work.

Based on the blurb above, I expected a story where his loved ones were kidnapped early in the book and we as readers spent most of the book watching him follow the clues and dead ends to rescue them. Instead there was a lot of exposition about Murphy's childhood and young adult years, followed by some current action, then, in the last quarter of the book the kidnapping and resolution.

What did I not like? Basically, the characters all seems so unrealistic. Murphy was a loner kid who had only one friend, but at some point he saw some trafficking victims and rescues them, and that is noticed by someone. He gets an appointment to the Air Force Academy, even though he never applied, and while there, is mentored by an Episcopal priest who is a chaplain, but who wears robes around the Academy, not a uniform. The chaplain signs him up for an online seminary and between his Academy work and the seminary program, Murphy is busy to say the least.

After graduation, instead of going into the Air Force, he goes to work for his mentor in some super-secret super exclusive group that rescues people. They set up a community for the folks they rescue where they can receive counseling, love, support, etc.--and I'm talking community, not a couple of buildings.
The bottom line is that I never figured out why all these people were together.  In writing this post, I learned that this is book two in the series and reading the blurb on book one explained a few of the characters, but there is one in particular that still makes no sense to me based on the content of this book. I could never get to the point of accepting the author's world as real.
The book is published by Thomas Nelson which is a Christian publisher and as noted, two of the characters are priests (I think--maybe they are just pretending)but while the theme of self-sacrificing love is there, I wouldn't call this a religious book.
I'd like to thank the publisher for making a review copy available via NetGalley. Grade: C.
Posted by RAnn at 12:18 PM