Don't you love Christmas Cookies? They are a tradition in my family. My mom used to make them when we were kids, and after we were adults, quit. That year one of my brothers protested. The next year, I took up making Christmas cookies. I've done it with my kids ever since. This year things didn't go as easily as planned. 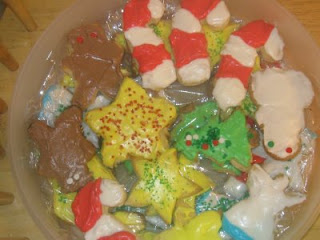 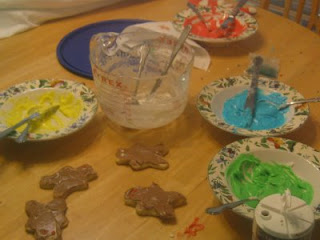 Around Thanksgiving, I found some boxes of Krusteze cookie mix at the store. I had used it a few years ago and remembered that I had been very happy. The dough was easy to work with and the cookies tasted great. Unfortunately, my experience with sugar cookies is that the easier the dough is to work with, the worse the cookies taste. Anyway, shortly after Thanksgiving my little one wanted to bake cookies and insisted that those were the ones she wanted. The box gave directions for a big batch and a little batch and there were two bags of white stuff in the box. I decided to make a small batch so I just took one bag of white stuff, and, as the directions said, added 1/4 cup water. It made a dough but one that was very sticky and hard to roll. I put it in the freezer for a little while and we managed but it was a *(&^ to work with. I finally got them in the oven, but before the timer went off, I smelled something burning. My cookies had melted and were scoarching. Into the trash they went.

Yesterday I decided to try again. I made sure I measured carefully because I figured I must have added too much water last time--what else could it be since water is all you add. I used one bag of mix, and, per the small box directions, added 1/4 cup water. It was a crumbly mess. I carefully added a smigen of water at a time until I got a dough I could work with. Since they came out ok, I opened the other box, and figured I'd mix up one packet from it. After I dumped the bag, I noticed the printing on the bag--icing. Yep, I had baked icing. I added 1/2 cup water to the next bag of mix, and it was easy to work with and tasted good.