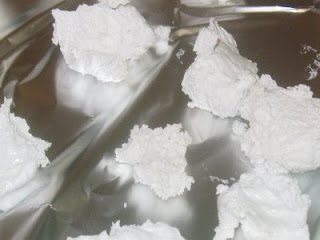 Everyone has something that they "have" to make during the Christmas season. One of my "musts" is divinity. Here is my recipe:

3 Cups Sugar
1/2 cup dark corn syrup
1/2 cup water.
Put together in a large saucepan and bring to a boil, stirring frequently and making sure to stir the syrup such that crystals on the side of the pan are dissolved. 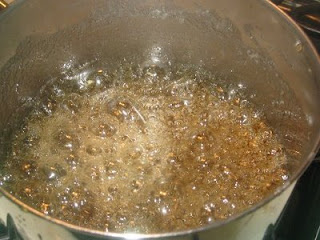 While the syrup is cooking, (or before you put it on) beat together:

Beat until egg whites are in stiff peaks (lift the beaters and they don't flop over. 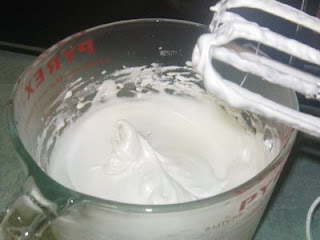 This is what it looks like after the first syrup is added to the egg whites.

Put the rest of the syrup back on the stove and cook until it reaches the hard ball stage. That means that the drop of syrup becomes a piece of hard candy in the water. Beat the syrup, a little at a time into the egg whites. Once fully incorporated, continue to beat until the mixture is stiff, loses its gloss and holds its shape when you life the beaters from the mixture. Quickly spoon out onto waxed paper, parchment or foil. Let cool and harden. Enjoy.
Posted by RAnn at 8:23 PM