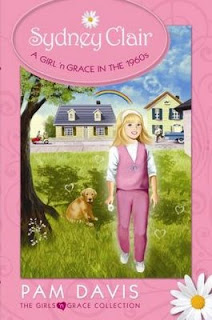 You may have been curious about the dolls and books referenced in the Girl 'n Grace doll contest post. Well, be curious no more. Here is a review of Sydney Clair, one of the Girl 'n Grace books.
This is an overly preachy take-off from the American Girl books. Sydney Clair Wilcox was ten years old in 1965. Her sister, who is about to enter college, wears white go-go boots and is for women's rights. Her mom works part-time at the library and doesn't want to work full-time. Her friend's mother is constantly telling her to be more ladylike. Sydney wants to buy a dog and she and her friends try various ventures, all of which end badly, to earn money. Then her parents buy her the dog. They compare the dog to the grace of God--both are freely given unearned gifts. One day the dog gets into a bunch of stuff, including some things her mom was doing for work. Because of that, her mother is forced to quickly come up with a new idea, right before an interview with her boss, and instead of being let go, since her part time job was going full time, her mom got a new part time job. Mom points out that the dog was a gift to her, and showed that God knew the desires of her heart. If the dog hadn't ruined what she had, she would never have gotten the new part time job. Then there is the part where Sydney surrenders her life to Jesus.

The illustrations are nice, and do depict suburban life in the 1960's. At the back of the book, a-la-American Girl is a section that is like a scrapbook of the late 1960's showing TV shows, the astronauts and mentioning the Jesus movement. That part is followed by several pages showing the Girls of Grace dolls (which appear to be the same size as American Girl dolls). They have a website and associated merchandise. As a matter of fact, several pages in the book have hearts in the text, and in the heart is .com, so I guess you can go to the website and play and buy stuff.

We went through the American Girl stage here with my oldest daughter, and maybe its a good thing I didn't find the dolls until well after I read the books.
I know AG is a merchandising machine that goes far beyond the books, but most of the AG books I read were good books. This one isn't. It is a sermon wrapped in a story,and not a very good story at that.
Posted by RAnn at 9:55 PM