As I listen to the weather and hear about Hurricane Danny developing I am brought back in time to August 2005.  In case anyone has forgotten, (and I assure you that New Orleans residents have not forgotten), Hurricane Katrina hit August 29, 2005.  I'm going to take some time this week to share some photos and memories with you.  The photos on this post were taken Christmas Day, 2005 in Long Beach Mississippi near the beach, near the border with Gulfport.


Friday night we watched the news and saw that a small Hurricane was on its way to ruin the  weekend for Florida.  Saturday was going to be a busy day for us.  Our first Girl Scout meeting was that morning and that afternoon we had a pool party scheduled to celebrate my older daughter's tenth birthday.  I noticed that traffic was heavy as we drove to the Girl Scout meeting and while we were there, the pastor started moving trash cans into the building where we were meeting. I wondered if the hurricane was heading our way.  On the way home I turned on the radio and heard that it was, and I saw that the interstate was jammed.  I swung by the pool to see if there was anyone there, and of course, there was a "closed" sign and the picnic tables and deck chairs had been sunk in the pool for safekeeping.  We did not generally evacuate and knew that a lot of people didn't.  We decided to go ahead with the party and just do it at the house; if people came, fine; if not, well, we'd try something the next weekend.  We ended up with quite a few kids. 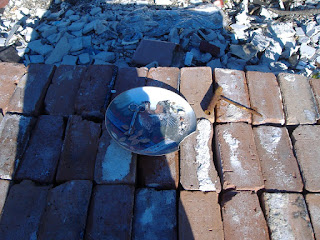 Before the kids got there, we were watching the news and I started to get nervous.  I had a one  year old and really didn't want to get stuck in a flooded house with her.  We had been talking about visiting my sister in Atlanta so we decided to leave after the party and go to Atlanta.  I called my parents in Mississippi and told them our plans.  My parents lived two blocks from the beach.  Their house had been fine during Camille, the old worst hurricane ever, and they had never evacuated.  However, this time my Mom was chronically ill and on oxygen.  When my brother, who lived behind them found out we were leaving he asked if we could take them with us.  Of course we agreed.

The most direct route between my house and my parents' is I-10.  However, I-10 was on "contraflow"--all the lanes headed toward Baton Rouge and places north, not to the East.  However we had no problem taking other roads to Mississippi where we picked up my parents and  headed toward Atlanta.  My baby travelled better when she was sleeping which is one reason we decided to make this trip at night.  Unfortunately she didn't sleep and the only thing that would shut her up was one video we had in the van, over and over an over again.  We spend the night in Montgomery AL and then finished our trip the next day.


On Monday, the day of the storm, we took the kids to the zoo.  We heard how awful things were on the coast and then got concerned when we couldn't contact my brothers.  One of my brothers ended up with four feet of water in his house.  The one behind my parents was fine, but my parents' house had water in it.  When the pictures of New Orleans started coming out, at first we were hopeful, then fearful and then we just didn't know..  It quickly became apparent that we weren't going home for a few weeks and so we registered the kids for school.

Labor Day weekend they allowed people who had left our Parish (county) to return to "look and leave".  My husband drove back and spent the night with friends in Baton Rouge.  When he got to our house he found that it was fine.  He emptied our refrigerator and freezer and buried the contents.  After a hot and miserable night, he returned to Atlanta.

The next weekend my sister, my brother who lives in Georgia and my Dad returned to his house to do basic clean up.  Luckily my brother and his girlfriend we able to sweep the water out of my parents' house and take a few other steps to mitigate the damages but a lot of work remained before Mom could return home.

My family remained in Atlanta until the end of September.  Schools here opened at the beginning of October and my husband and I both had jobs to which to return.  While life was certainly inconvenient until Christmas or sometime thereafter, we were back in our house, going to work at our jobs and to school at our schools.  The biggest change was friends who did not return.

If you are interested in seeing the area in those photos as it looked in May 2013, click here to go to Google Maps.  All those vacant lots used to be homes.