It is time for a FIRST Wild Card Tour book review! If you wish to join the FIRST blog alliance, just click the button. We are a group of reviewers who tour Christian books. A Wild Card post includes a brief bio of the author and a full chapter from each book toured. The reason it is called a FIRST Wild Card Tour is that you never know if the book will be fiction, non~fiction, for young, or for old...or for somewhere in between! Enjoy your free peek into the book! 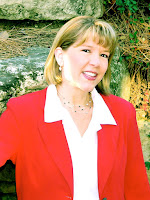 Deborah Raney is the author of several novels, including Nest of Sparrows and the RITA Award-winning Beneath a Southern Sky. Her novel A Vow to Cherish was made into the highly acclaimed Worldwide Pictures film of the same name. She lives with her husband and four children in Kansas.

The parade of taillights smoldered crimson through the patchy fog hovering over Old Highway 40. Mickey Valdez tapped the brakes with the toe of her black dress pumps, trying to stay a respectable distance from the car in front of her.

The procession had left the church almost twenty minutes ago, but they were still barely two miles outside Clayburn’s city limits. The line of cars snaked up the hill––if you could call the road’s rolling incline that––and ahead of her, the red glow of brake lights dotted the highway, flickering off and on like so many fireflies. Cresting the rise, Mickey could barely make out the rows of pewter-colored gravestones poking through the mist beyond the wrought-iron gates of the Clayburn Cemetery.

She smoothed the skirt of her black crepe dress and tried to focus her thoughts on maneuvering the car, working not to let them stray to the funeral service she’d come from. But when the first hearse turned onto the cemetery’s gravel drive in front of her, she lost it. Her sobs came like dry heaves, producing no tears, and for once, she was glad to be in the car alone.

The line of cars came almost to a standstill as the second hearse crept through the gates.

The twin black Lincolns pulled to the side of the gravel lane, parking one behind the other near the plots where two fresh graves scarred the prairie. The drivers emerged from the hearses, walked in unison to the rear of their cars, and opened the curtained back doors. Mickey looked away. She couldn’t view those two caskets again.

When it came her turn to drive over the culvert under the high arch of the iron gates, she wanted desperately to keep on driving. To head west and never turn back. But Pete Truesdell stood in her way, directing traffic into the fenced-in graveyard. Mickey almost didn’t recognize Pete. He sported a rumpled navy double-breasted suit instead of his usual coveralls. How he could see through the tears welling in his eyes, Mickey didn’t know.

Her heart broke for the old man. She wondered if he was related to the family somehow. Seemed like everybody in Clayburn was related to at least one other family in town. Everybody but the Valdezes.

Pete waved the car in front of her through the gates and halted her with his other hand.

Maybe if she stayed in the car until the procession left the cemetery. She didn’t want to walk across the uneven sod. Didn’t want to risk the DeVore kids seeing her…risk breaking down in front of them. What would she say? What could anybody say to make what had happened be all right?

She didn’t know much about carbon monoxide poisoning, but she’d heard that Kaye and Rachel had simply drifted off to sleep, never knowing they would wake up in heaven. She wondered if Doug DeVore found any solace in that knowledge. Maybe it was a small comfort that his wife and daughter had left this earth together.

But on Thanksgiving Day? What was God thinking?

She’d never really gotten to know Kaye DeVore that well. They’d exchanged pleasantries whenever Kaye dropped the kids off at the daycare on her way to her job at the high school, but usually Doug was the one who delivered the children and picked them up at night when he got off work at Trevor Ashlock’s print shop in town.

The DeVore kids were usually the last to get picked up, especially during harvest when Doug worked overtime to keep his farm going. But Mickey had never minded staying late. It wasn’t like she had a family of her own waiting for her at home. And she loved those kids.

Especially Rachel. Sweet, angel-faced Rachel, whose eyes always seemed to hold a wisdom beyond her years. Mickey had practically mourned when Rachel started kindergarten and was only at the daycare for an hour or two after school. Now she forced herself to look at the tiny white coffin the pallbearers lifted from the second hearse. She could not make it real that the sunny six-year-old was gone.

Through the gates, she watched Doug climb from a black towncar. One at a time, he helped his children out behind him. Carrying the baby in one arm, he tried to stretch his free arm around the other four kids, as if he could shelter them from what had happened. How he could even stand up under the weight of such tragedy was more than Mickey could imagine. And yet, for one shameful, irrational moment, she envied his grief, and would have traded places with him if it meant she’d known a love worth grieving over, or been entrusted with a child of her own flesh and blood. She shook away the thoughts, disturbed by how long she’d let herself entertain them.

She dreaded facing Doug the next time he brought the kids to the daycare center. Maybe they wouldn’t come back. She’d heard that Kaye’s mother had cancelled her plans to winter in Florida like she usually did. Harriet Thomas would remain in Kansas and help Doug out, at least for a while. Wren Johanssen had been helping with the kids and house, too, when she could take time away from running Wren’s Nest, the little bed-and-breakfast on Main Street. Wren was like a second grandma to the kids. Thank goodness for that. Six kids had to be—

Mickey shuddered and corrected herself. Only five now. That had to be a handful for anyone. The DeVores had gone on vacation in the middle of April last year, and with their kids out for a week, the workload was lighter, but the daycare center had been deathly quiet.

Deathly. Even though she was alone in the car, Mickey cringed at her choice of words.

She started at the tap on the hood of her car and looked up to see Pete motioning her through the gates. She put the car in gear and inched over the bumpy culvert. There was no turning back now. She followed the car in front of her and parked behind it next to the fence bordering the east side of the cemetery.

A tall white tombstone in the distance caught her eye and a startling thought nudged her. The last time she’d been here for a funeral had also been the funeral of a mother and child. Trevor Ashlock’s wife, Amy, and their little boy. It would be five years come summer.

As if conjured by her thoughts, Trevor’s green pickup pulled in beside her. Mickey watched in her side mirror as he parked, then helped his young wife climb out of the passenger side. Meg walked with the gait of an obviously pregnant woman, and Trevor put a hand at the small of her back, guiding her over the uneven sod toward the funeral tent.

Mickey looked away. Seeing Trevor still brought a wave of sadness. Because of his profound loss, yes. But more selfishly, for her own loss. She’d fallen hard for him after Amy’s death—and had entertained hopes that he might feel the same about her. That she might be able to ease his grief. But he was too deep in grief to even notice her.

Then Meg Anders had moved to town and almost before Mickey knew what happened, Trevor was married. He and Meg seemed very much in love, and Mickey didn’t begrudge either of them an ounce of that happiness. But it didn’t mean she was immune to a pang of envy whenever she saw them together.

This day had to be doubly difficult for Trevor. It must be a comfort to Doug having Trevor here––someone who’d walked in his shoes and still somehow managed to get up the next morning––and the next and the next.

Again, she had to wonder what God was thinking. Where was He when these tragedies struck? How could He stand by and let these terrible things happen to good men…the best men she knew, next to her brothers? None of it made sense. And the only One she knew to turn to for answers had stood by and let it all happen.
click here for my review
Posted by RAnn at 1:07 AM