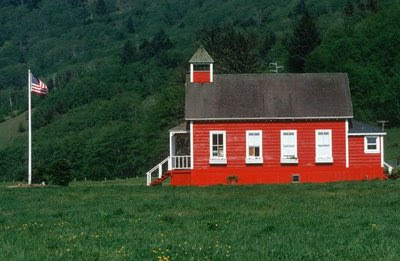 This lovely picture is from Visions of America: Photographing Democracy. I received a review copy from Lisa at Online Publicist. Visions of America is what is often called a "coffee table" book, in other words, it is a large heavy hard-covered book filled with beautiful pictures, all relating to some central theme. As part of this blog tour, I was sent twelve of the pictures in the book. Lately, I've been trying to come up with something to write about other than just a constant diet of book reviews. When I got those pictures, I decided that I was going to do a series of posts--one on each picture. I'm not going to describe the picture--you can see for yourself what it looks like. I'm not going to tell you its context in the book--you can get the book and see for yourself. Rather, I'm going to use these pictures as writing prompts, as things to get me writing about something, and I hope you like the results.
The little red schoolhouse, that one-roomed country school, is where many of our parents and grandparents were educated. School will be starting here in three more weeks and I will have a high school senior (but he won't graduate until December 2010), a high school freshman and a kindergartner. Yes, one starting, one finishing. Today's paper had an editorial condemning the idea of a vocational high school diploma. Basically, in Louisiana, you have to pass the LEAP test in eighth grade to get into high school. Once in high school you have to pass the GEE. Someone told me once that the minimum passing score on the LEAP was approximately equal to the 30th percentile on a norm-referenced standardized test. Particularly in schools in poor socio-economic areas, there are kids who have been through eighth grade a couple of times and are several years behind their peers. Most of these kids end up dropping out. The suggestion was to allow them to get a special career diploma, and to have them take career-oriented classes rather than those that would allow college admittance. The writer of the editorial claimed that by allowing this lower diploma, the state was refusing to set high standards and was condemning these kids to a second-class existence.
Years ago, I would have agreed. After all, my kids did well in school. I worked hard to make sure they did. I was time-consuming, but it was worth it. High standards are a good thing, we all know that. Set the target too low and people will be satisfied with just hitting it; set it higher and they will reach higher. Then my autistic son, who had always made Bs and Cs entered high school. His grades quickly became Ds and Fs and we were working harder than we ever worked. The school told me that things would get better. They were wrong. This school had high standards. According to them, all of their students, if they kept their grades up, would be prepared for college. All took four years of science, English, math, history and religion. All took two years of a foreign language. However, none took any classes that would prepare them to make a living right out of high school. Being prepared for college is a wonderful thing, but what about the kids who aren't going to college? That was a Catholic school that could always expel kids who couldn't make the grade (or encourage them to find "someplace that can better meet your needs") but what about public schools that have to take all kids, and keep them. Should they have "high" standards, or should they try to meet the needs of the students they have.
My son is now in public school, and isn't meeting those "high standards" set by the Catholic school. However, he is learning and growing, and slowly regaining the self-confidence he lost during those Catholic school years. His classes now are not college prep, but it was eye-opening to him to get on the internet and research the price of apartments, cars and other necessities and prepare a budget for living on his own. It wasn't a nothing task, and required skills that will serve him better in the long run than another year of Algebra.
One big difference I've noticed between high school as it was 30 years ago and high school as it is today is the harder curriculum, no matter what type of school is chosen. The number of academic courses required is up; the number of fluffy electives is way down. Home ec courses are few and far between; shop, if offered, is more geared toward making a living than toward home maintenance or hobbyists. Art classes are hard to find. All the required courses mean that you don't have time for a second foreign language if you want one. Since she is in an academic magnet school, my artistically talented daughter may never get a full art course (though she does get some pull-out time); however, she'll get four years of science, which she despises. College admission now requires it.
While I'm not a fan of allowing teens to fritter away their time taking classes that don't challenge them, I do think that a by-product of our push for high standards has been the loss of kids who aren't academically inclined and a failure to develop non-academic talents in those who are. While I want my kids' schools to encourage them to be the best they can be, and I want them to work hard to help my kids attain the skills needed for life today, I also want those schools to realize that my child (and yours) has unique likes, dislikes, gifts and disabilities. I really don't like this idea of shoving all the kids onto one path. As Americans we value all people, even those who aren't heading for college.
Posted by RAnn at 12:05 AM