New Giveaway: Wind of the Spirit 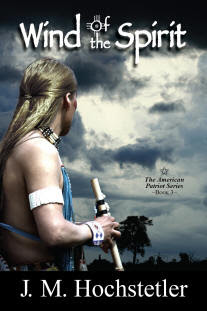 From the Back Cover:
The fateful confrontation between the untried Continental Army under General George Washington and an overwhelming invasion force commanded by British General William Howe explodes at the Battle of Brooklyn. With the patriot cause on the brink of ruin, Elizabeth Howard scrambles for critical intelligence—and her life. Meanwhile, far out on the western borders, Brigadier General Jonathan Carleton, as the Shawnee war chief White Eagle, succeeds in driving white settlers from Ohio territory through a series of lightning raids. At the same time Blue Sky’s seductive charms and the rapidly escalating conflict with Wolfslayer force White Eagle to walk a treacherous tightrope between the beautiful widow and the shaman.

As the British close in on Carleton’s whereabouts, and with Washington poised to make a desperate, last-ditch gamble to save the American cause at Trenton, Elizabeth rejoins Colonel Charles Andrews on a desperate journey to find Carleton before his enemies can execute him for treason. Can her love bridge the miles that separate them—and the savage bonds that threaten to tear him forever from her arms?

ISBN 978-0-9797485-3-0
Trade paperback with maps, appendix, and study guide.
$13.99
Here's the deal: I got this book from Christianreviewofbooks.com. I've had it here for some time, and have tried a couple of times to read it, and I just can't get into it. I don't think it is an awful book; its just not the book for me. The only problem is I promised them a review in exchange for the book. I don't think it is fair for me to write a poor review of the book since there was nothing wrong with the little I read, except, as I said, it didn't grab me. So, what I'm going to do is a giveaway. If you want this book, leave me a comment with your email address. By accepting this book, you are agreeing to either 1) write a review and post it on Christianreviewofbooks.com or 2) Pass it on to someone who will. I'll draw a winner July 20. US only.
Posted by RAnn at 11:00 PM