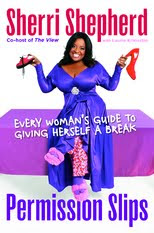 When it comes to the popular media, I am totally uncool. I don't watch TV except for what I happen to hear because I'm on the computer in the same room. I most certainly do not watch daytime TV and the little of it I've seen has made me say "It's enough to send you to work if for no other reason than to get away from it". When Hatchette offered complimentary review copies of Permission Slips: Every Woman's Guide to Giving Herself a Break

I didn't realize the author, Sherri Shepherd was the host of a popular show. My husband saw the book and wondered why I was reading about what that liberal ____ had to say. Oh well.
I've found the book to be both amusing and sad. The writing style is breezy; its like listening to a girlfriend who has been there and done that. Shepherd is the first to say she has made some real mistakes in her life, but so far 9and I haven't finished the book yet) she doesn't seem to have figured out why she did such dumb things. She was raised as a Jehovah's Witness and attended church regularly, but saw her virginity as something to get rid of at 14, not because she was in love, but because she heard sex was great. She went through a series of relationships with men who were real losers.
The book is autobiographical to a point. She tells stories from her life to illustrate her points, and throughout the book tells women to give themselves permission to____. Some of the things she encourages us to give ourselves permission to do include forgiving others, taking naked pictures of yourself (not in a million years thank you, and it has nothing to do with any perceived figure flaws), being blunt, and saying hello to God.
I'm enjoying this book, and thanks to the folks at Hatchette, five of my readers will get to enjoy it too. The usual Hatchette conditions apply: US or Canada only, no PO Boxes. To enter:
Posted by RAnn at 11:09 PM