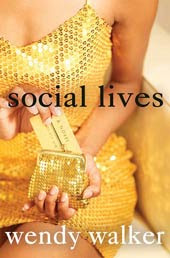 Thanks to the author, Wendy Walker for allowing me to review this fascinating book. Social Lives

is about rich folks who live a suburb of New York:

Step into picture-perfect Wilshire, home to some of the most privileged people in the world, where one woman’s desperate act could bring the precariously balanced social order crashing down…

Wilshire, Connecticut, the gilded enclave of Manhattan’s prosperous elite, appears to be a vision of suburban tranquility: the mansions are tastefully designed, the lawns are expertly manicured, and the streets are as hushed as the complexities in the residents’ lives. While Wilshire's husbands battle each other in the financial world, their wives manage their estates and raise the next elite generation. Some women are envied, some respected, and others simply tolerated. But regardless of where they stand, each woman is defined by the world she inhabits and bound by the unyielding social structure that surrounds her.

Rosalyn Barlow, the most envied woman in Wilshire, is waging a battle of social manipulation to silence the scandalous gossip that threatens her daughter's reputation while her self-made billionaire husband grows more and more distant in his young retirement. But for fourteen year-old Caitlin Barlow, navigating life as a teenager in a culture of wealth and sexual promiscuity has become far more perilous than either of her parents knows. Newcomer Sarah Livingston has nothing but disdain for everyone and everything around her and a growing terror at having another child in a world she's come to resent. As she is pulled into the Barlow family's storm, the walls begin to close in around her marriage and the life she once thought she wanted. And for Jacqueline Halstead, who's just discovered her husband is under investigation for fraud surrounding his hedge fund, saving her family from total ruin means doing the unthinkable - and shaking the Barlow family, Wilshire's insular community, and herself to the core.
As I said when I reviewed Walker's first novel, Four Wives, if this is what being rich is all about, I'm glad I'm not. The women in the story are all in the same social group and all claim to be friends, but the back-stabbing, petty put-downs and "me first" attitudes many of them carry don't endear them to me. The character who meant the most to me was the 14 year old daughter, Caitlin. She was a girl in need of parenting and what she got instead were playmates and nannies (and I'm not knocking nannies--good childcare workers are worth their weight in gold, but they aren't parents and shouldn't have to substitute for parents).
I enjoyed the book. It had a plotline that resolved in a reasonably satisfying manner, though I wouldn't exactly call it a happy ending. It was really more about the characters than the plot.
The book is mass-market fiction with sexual activity between people who are not married, but no vivid descriptions thereof. It doesn't glorify that activity; rather it comes across as yet another example of how money can't buy happiness.
To read an excerpt or see a book trailer, check out Wendy Walker's website.
Posted by RAnn at 12:10 AM