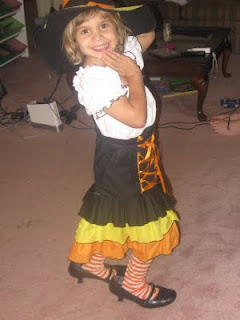 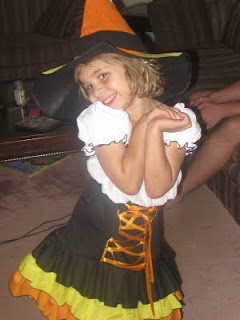 Tonite was Trunk n Treat at my youngest's school. Even though it rained, turning it into "collect candy at decorated tables", a good time was had by all. For a costume, I planned to send her to the large box of dress-up clothes to assemble some sort of princess or dancer garb. However, when we got home from school this afternoon, she went into the room she shares with her sister and put on her sister's candy corn witch costume. Her sister had planned to purchase the teen version, but when she got to Party City, all that was left was the adult version. My husband asked her what the difference was, and she replied "This one is shorter, I'll have to wear leggins under it. Smart girl. My teen daughter looked cute when she wore it for a Girl Scout party Monday nite, even with leggins, but when the little one came out in it this afternoon, was was adoreable.

The bag in which it came showed the model wearing very high heeled black shoes, so my little one thought SHE should have high heeled shoes. She wore my sensible black work shoes, which for her WERE high heels. Lots of folks tonite said that the shoes made that costume. Well, something must have "made" it because she won the costume contest and won a pumpkin full of candy (like she didn't collect enough in her own pumpkin, right?).