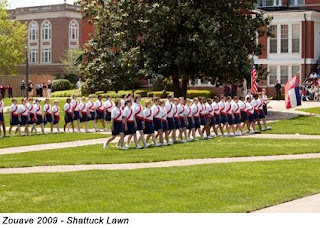 (Photo from Mississippi's First Alumnae Association website)
I am a proud alumna of Mississippi University for Women, the first and last state-supported institution of higher learning exclusively for women.  My class, the Class of '83 was the last to graduate all women.  Thanks to the Supreme Court Case of Mississippi University for Women v Joe Hogan, the school was forced to become co-educational.  Today, even though the school is about twenty percent male, the name remains Mississippi University for Women.  The current president has championed a name change as being a way to increase enrollment and, therefore, keep the school independent and financially solvent.  Most vocal, financially-supporting alumna are against the name change.  Until recently, even though men were admitted, the stated purpose of the school was focused on women.  The current president has vacillated between attempting to turn the school into sort of a public version of the private small liberal arts college and trying to turn it into a senior version of the local community college.  She believes the name of the university makes it difficult to recruit men, who even if they know it is coed, don't want to attend a school with that name; and to recruit women, most of whom are not interested in a single-sex school.

It is with that background that I ask "What is better for our daughters, single-sex schools, or coed ones?  I'll be the first to admit that the only reason I gave the W a second look was because they offered me a substantial scholarship.  I wanted to go off to school, and my parents weren't paying for that, only for the local junior college.  I figured where there were that many girls, there must be boys in one way or another, and sure enough, after I got there,  I noticed that those girls who wanted regular dates usually had them.  Even in those days there were rumors of the place going coed, and at first I thought that would be wonderful--I mean the lack of guys was the only thing "wrong" with the school, as far as I could see.  Some older students quickly set me straight and told me what the studies showed about women's colleges--that as a whole, women who graduated from women's colleges were more academically successful and more leadership oriented.  Not having men around eliminated the temptation for women to appear less bright than they were so as to be attractive to men.  In a single-sex environment, women were more likely to be called on in class and to be campus leaders.  By the time I graduated, I was a firm believer in the value of an education at a women's university.

What is the best way to prepare our daughters for the future?  Are they best served in an environment where they can learn and grow without the distraction of and competition with men, or do they need to be with men so as to learn to work with and compete against them?   Would you have considered a women's college had an affordable one been available?  Would your daughter?  Has society outgrown women's colleges, or do they still fill a useful purpose?

That was the end of this post (which was pre-written) until Sunday, when I read this post asking whether we are now short-changing boys.   So, now I also ask, what is better for boys, a single-sex environment or coed?  I've heard that all boy environments encourage boys to achieve, without the distraction of girls, and without as much temptation to be "cool" and stupid.  I've also seen how all boy environments can be testosterone-laden "whose got the biggest ones" contests where the weak are crushed.  I've heard high school teachers say that having girls there civilizes boys.  Have you had any experiences to share?
Posted by RAnn at 2:05 PM