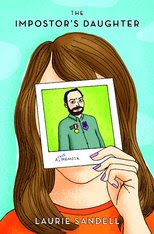 One final giveaway for tonite: Imposter's Daughter.
Laurie Sandell grew up in awe (and sometimes in terror) of her larger-than-life father, who told jaw-dropping tales of a privileged childhood in Buenos Aires, academic triumphs, heroism during Vietnam, friendships with Kissinger and the Pope. As a young woman, Laurie unconsciously mirrors her dad, trying on several outsized personalities (Tokyo stripper, lesbian seductress, Ambien addict). Later, she lucks into the perfect job--interviewing celebrities for a top women's magazine. Growing up with her extraordinary father has given Laurie a knack for relating to the stars. But while researching an article on her dad's life, she makes an astonishing discovery: he's not the man he says he is--not even close. Now, Laurie begins to puzzle together three decades of lies and the splintered person that resulted from them--herself.

This giveaway is subject to the usual Hatchette guidelines: US or Canada only, no PO boxes, let someone else win if you already have elsewhere, please. To enter, leave me a comment with an email address (no address, no entry) naming a celebrity you'd like to interview. For a second entry, blog about this. For a third, fourth or fifth entry, comment on one of my other posts (not contests) and then leave a comment per post here, telling me that you commented on a particular post. Good luck. I'll draw five winners July 10.
THIS GIVEAWAY IS NOW CLOSED.
Posted by RAnn at 9:21 PM