Worth A Thousand Words--Blog Tour and Review 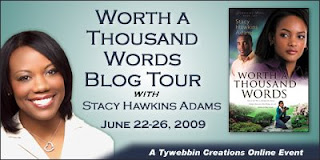 Worth a Thousand Words is the second book in Stacy Hawkins Adams' Jubilant Soul series. You can read my review of the first, The Someday List, here, and it will give you a link to the first chapter as well. While The Someday List focused on a middle-aged married couple, Worth a Thousand Words is about Indigo, at whose college graduation party the story opens. At that party, her long-term boyfriend, who is about to join the navy, publically asks her to marry him. She loves him, but had planned to go to graduate school in New York.

She is in her hometown for the summer, working as a photography intern for the local paper. She loves her boyfriend, but isn't sure that she wants to marry him, at least at that time. She has health problems that summer which cause her to lose her internship, and her aunt, who owns a beauty shop, has a stroke, so she ends up spending the summer running the business end of the salon. She is trying to discern what to do with her fiancee, her schooling, her career. In the meantime, her fiancee is dealing with his own secrets. Telling you how it all worked out would be a spoiler, so I won't.

The book is Christian fiction, and it shows. It definitely preaches "trust God and He will work things out" and "pray and listen to God". It also strongly pushes Christian sexual morality.

Adams did a good job with her characters; they are complex people with many facets to their behavior and personality. However, she should have let them carry more of the story. There was too much narration, too much telling the reader what was going on rather than showing them-I'm not sure I'm explaining it right, but there was just something about the writing style that struck me as needing work, not quite there, but the characters themselves and the story were good.
Take a little time and visit the other stops on this tour:
http://www.urbanchristianfictiontoday.com