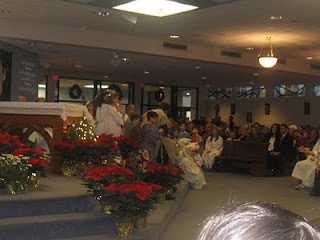 Given that we have a young child in the family, the Children's Mass is a given here on Christmas Eve--but I'll let you in on a secret--I generally hate it.  Oh, I've had at least my share of turns to be proud Mom as my kids have been in the pageant, or read, or otherwise done something at the Children's Mass, but still, the church is crowded, the atmosphere often less than reverent, and you have to be there so early or you end up standing in the back.  I don't know exactly what was different about this year, but I really felt like I'd been to church when it was over, rather than to the playground.

The pageant took the place of the Gospel reading, and except for a few words by Father, the homily as well.  The story was read from the ambo, and the kids in costume came up one of the aisles and gathered around the manger.  With each group that came up (Mary & Joseph, shepherds & sheep, angels, and wise men) a different carol was sung by the choir and folks were asked to join in.  After everyone was up there, they sang Happy Birthday to Jesus and then, to the tune of Jingle Bells, something like Ring, Ring, Ring the Bells....and tell the world that Jesus Christ is Born! 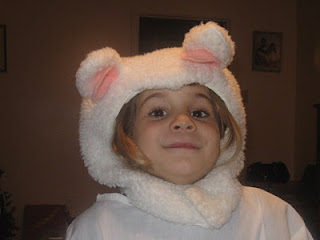 The star of the photos here is my five year old.  She was one of the lambs. 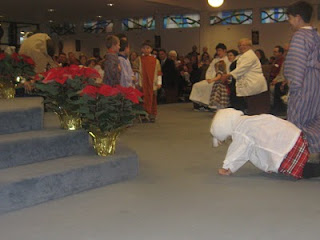 Since I was in charge of the readers--making sure they got up to the ambo when it was their turn to read--I had a good seat only a few rows back, and there was actually some space between me and the folks next to me.  After the pageant, my daughter came and sat with me. She took to heart the choir director's admonition to the kids to sing loudly.  I took those photos from my seat, and my husband and big kids were sitting near that glass wall with the wreaths on it--in other words on the other side of the church.  The Communion song was Little Drummer Boy and they could clearly hear the little one singing "Pa Rum pa pa pum".  The people around us told her how nice she sounded @@

After mass we went home.  I had dinner in the crock-pot so got home and put dinner on the table.  We'll open gifts from family tonite, and the gifts from Santa tomorrow morning. We'll head to my family tomorrow where my kids will get too much stuff.