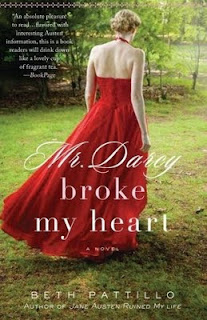 I must be the only book blogger out there who has never read anything by Jane Austen.  I've read enough about her to know that Mr. Darcy was one of her romantic heroes but before I read this book I couldn't have told you in which of her books he appeared, or whether he was a good guy or a bad guy.  When Phenix & Phenix offered me a complimentary review copy, I accepted because I recognized the author's name and really enjoyed her Sweetgum books, not because I was a huge Austen fan who could hardly wait to read more about her characters.

The main character in this book is Claire, a woman in her thirties who has spent her life doing for others.  Her parents died when she was eighteen and she got a job to support her sister, rather than allowing her sister to be put in the care of someone else.  Of course, that meant that she didn't get to go to college.  Her sister did go, became a teacher, married and had two kids.  At the beginning of this book she was pregnant with the third.  Her sister had planned to go to Oxford (that's the university in England) that summer to present a paper about Pride and Prejudice

.  Claire ends up going in her place.  While there she meets a man who reminds her of Mr. Darcy.  She also meets a woman who claims to have the lost original draft of Pride and Prejudice

.  This woman feeds her the draft chapter by chapter, and we get to read it along with Claire.  Since I've never read Pride and Prejudice

I've heard it said that the difference in a good book and a great one is that the good ones entertain us while the great ones, along with entertaining is, cause us to learn something about ourselves.  Hearing the other people in her seminar present papers on Pride and Prejudice

, reading the "original" and talking to the custodian thereof, as well as things that happen to her while she is there, cause Claire to take a look at her life, where she is, how she got there, and where she wants to go from there.  I really enjoyed taking this journey with her and highly recommend Mr. Darcy Broke My Heart

.  It may not have the long-term appeal of Pride and Prejudice

but it did get me thinking about some aspects of my life, and it was a good entertaining read.

It will be published in February, but you can order a copy now on Amazon.com