Debbie Viguié has been writing for most of her life. She has experimented with poetry and nonfiction, but her true passion lies in writing novels.

She obtained her Bachelor of Arts degree in Creative Writing from UC Davis. While at Davis she met her husband, Scott, at auditions for a play. It was love at first sight.

Debbie and Scott now live on the island of Kauai. When Debbie is not writing and Scott has time off they love to indulge their passion for theme parks. 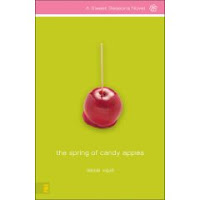 Once again Candace found herself seated across from a Zone executive. Only this time it wasn’t Lloyd Peterson, the hiring manager; it was John Hanson, owner of the theme park. She tried hard not to squirm in her seat. He was smiling and friendly, but there was so much more at stake this time than a part-time job.

“So, Candace, as one of the five finalists for The Zone Game Master Scholarship, you must be pretty excited,” he said.

Excited. Bewildered. Nervous. So many to choose from. Excited because the winner got a full scholarship to a college in Florida. Bewildered because she still couldn’t believe her Balloon Races doodle could be taken seriously by anyone. Nervous because she didn’t want to blow it.

She’d finally forgiven her friend Josh for secretly entering her in the competition.

“Just try to relax,” he urged.

“Now, as you know, there are many stages in the competition and you’ve passed them all to get this far. During the first stage contestants who don’t meet the qualifications are weeded out. Every year I’m surprised to hear how many of those there are. Next the Game Masters take a look at the attraction concepts for viability. Then they announce the top twenty candidates.”

Candace vaguely remembered that and how shocked she had been. She had just doodled her Balloon Races idea for a new them park ride on a napkin. She had been about to throw it away but gave it to Josh instead and he had secretly entered it in the scholarship competition.

“At that point we announce the candidates and give everyone who works for The Zone a chance to submit a recommendation for a candidate. Now, this isn’t just some sort of popularity vote. Recommendations are serious things. The person filling it out has to take the time to submit a ten-page form evaluating your strengths and telling the search committee exactly why they believe you should have the position. Based on the strength and numbers of those recommendations, the group of twenty is narrowed to five.”

“Wow! I can’t believe enough people recommended me,” Candace said, humbled at the amount of work it sounded like that would take.

“Several people here think quite highly of you. You had enough recommendations to just beat out a another young man for the fifth spot.”

“So, I’m here because I had one more recommendation?”

“Basically, yes. It’s policy that we don’t allow contestants to see their recommendations. However, since you are in the top five, I can tell you the people who recommended you.”

Suddenly, Candace realized her heart was in her throat. This somehow made her more nervous than the interview itself. It was a reflection of what people thought of her and how they had chosen to support her. She found herself holding her breath as she waited for the names.

“You had eight recommendations. The first seven came from your supervisor, Martha, Kowabunga referee Josh, Muffin Mansion’s Becca and Gib, Sue from janitorial, Roger from The Dug Out, and Pete the train operator.

None of those came as a great surprise, but Candace was touched and flattered that they would all spend the time and effort on her. She made a mental note to thank them later. That had to mean that the final recommendation that had put her over the top had to come from her boyfriend Kurt. She felt a warm glow as she thought about him.

“And the last one to come in was from Lisa in food carts.”

Candace was stunned. It wasn’t Kurt, who had written a recommendation for her, but rather Lisa, the girl who hated her? “Are you sure about that?” she burst out.

“Nothing,” Candace mumbled, dropping her eyes.

The owner of the park chuckled. “Sometimes it’s a surprise when we discover who has actually noticed and thought we’ve done a good job.”

“And so, here you are—one of the final five contestants.”

“What happens now,” Candace asked, still a little unsure about the entire process.

“This is it. I stay out of the selection process until the very end. Now I interview the five candidates and choose the winner.”

“You’ve been doing seasonal work for us, is that right?”

“You know, I think it’s time to upgrade you. How would you like to work part-time at The Candy Counter?”

“In the Home Stretch?” she asked.

“That would be the one.”

“That would be great,” she said, not sure what else to say at the moment. She hadn’t really had a chance to think about working during the spring. There was a part of her that was instantly excited, though. Working at The Candy Counter meant she wouldn’t be working at a cart.

“So, shall we begin the interview?” he asked, the smile leaving his face.

After the interview, Candace headed straight for the Muffin Mansion. There were no customers inside and Candace made a beeline for Becca, who was manning the cash register. Candace walked around the counter and gave Becca a big hug.

“What was that for?” Becca asked.

“For recommending me! I’ve got a hug for Gib too. Is he here?”

“He should be back from break in a minute.”

“So, how did the interview go?” Becca asked.

“I’m not sure. I feel like I totally blew it,” Candace confessed.

“Everyone probably felt that way.”

“I don’t know. I’m still not even sure how I’ve gotten this far in the competition.”

Becca smiled. “Josh has been showing a copy of your drawing to everyone.”

Candace rolled her eyes. “Great, one more thing I’ve gotta kill him for.”

“Hey, go easy on the guy. If you get that scholarship you’ll owe him big time for entering you.”

“Kurt didn’t recommend me for the competition,” Candace admitted.

“How did your interview go?” a deep voice asked.

Candace jumped off the counter and hugged a surprised Gib. He patted her back awkwardly.

“Thank you for nominating me,” she said.

Before Candace could respond, customers streamed through the door. She gave Becca and Gib a little wave and headed out. Once in the clear she headed for the Splash Zone, hoping to catch Josh who had started again a couple of days earlier in anticipation of summer. She saw him in his tank top and shorts in front of the Kowabunga ride.

“You’ve gotta be cold,” she said as she walked up.

“It’s worth it for not sweating through the summer,” he said with his customary grin. “So, how’d it go?”

“I don’t know,” she confessed as she gave him a hug. “But thank you for nominating me. Thank you for entering me,” she said, laughing a little.

“Told you the Balloon Races was cool,” he said.

She stepped back with a laugh. “Remind me to listen to you more.”

He grew serious for a moment. “I hope so, but I don’t know. I entered you and I nominated you. That was really all I could do. It’s out of my hands.”

She was about to tell him who had nominated her when she remembered she had other news. “I did get a part-time job out of it,” she said.

She nodded. “I’m going to be working at The Candy Counter.”

“That’s great! Congratulations. I’m going to miss seeing you on the carts, though.”

She shrugged. “We can still hang on breaks.”

“Absolutely! Well, that is, after the Talent Show. My team and I are practicing a lot.”