Cherie Blair is a human rights lawyer and campaigner on women's rights and empowerment, wife of former British Prime Minister Tony Blair, and author of Speaking for Myself. Steve Chalke is UN.GIFT special advisor on human trafficking, and founder of Stop the Traffik. He is the author of several books, including Change Agents, Intelligent Church, The Lost Message of Jesus, and Trust. 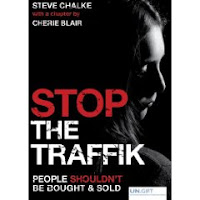 Wihini, aged nine, and her brother Sunni, aged seven, loved on Thane train station in Mumbai, India with their parents—both alcoholics. Wihini and Sunni went to a day centre where they learned to read and write and were given the chance to play.


One day Sunni and Wihini simply didn’t turn up. Street children often tend to disappear for days, as they try to scrape a living sweeping long-distance trains, but they had been attending the center daily for three months, so when a week or so went by the project staff became worried, and went in search of their parents. The workers found the father lying drunk on the station platform. When they roused him and asked about the children, he admitted that a man had come to him one morning offering money for them. He needed money for alcohol, so he agreed. The trafficker had taken Sunni and Wihini away for the equivalent of just 20 British pounds (currently equivalent to $30 US dollars). The father was angry because he had never received his money. Their mother wouldn’t speak about it. The children were never seen again.


What happened to Sunni and Wihini? Nobody knows. In that area of Mumbai, children often disappeared. They are kidnapped or sold into prostitution, forced labor, adoption, or even child sacrifice. The workers at the Asha Seep center had seen this before. But this was once too often.


Wihini and Sunni’s story proved to be a catalyst. The story was picked up and passed on and as evidence gathered we realized this is happening on a huge scale, around the world—and even on our own doorsteps. Not 200 years ago. Not even fifty years ago. It was—and is—happening today. And so STOP THE TRAFFIK was born.

Human trafficking is the dislocation of someone by deception or coercion for exploitation, through forced prostitution, forced labor, or other forms of slavery.


-800,000 people are trafficked across borders each year (US State Department)

-It is estimated that two children per minute are trafficked for sexual exploitation. This amounts to an estimated 1.2 million children trafficked every year (UNICEF)

-Total profit from human trafficking is second only to the trafficking of drugs (The European Police Office; Eurpol)


The numbers tell you the huge scale of this problem. But behind each number is a sea of faces. Behind the statistics are mothers and father, husbands and wives, sons and daughters, brothers and sisters, torn apart by trafficking; these are innocent lives ruined by abuse. These are human rights violations on a grotesque scale. And the problem is getting worse.

Click here for my review
Posted by RAnn at 6:55 AM