The Potluck Club Cookbook: My Review

I have two books on blog tour this week. One is The Potluck Club Cookbook. The bottom line with a cookbook is the recipes. If they aren't good, then the cookbook is useless, no matter how pretty or entertaining. Therefore, My assistant and I will prepare one of them and we'll let you see pictures of the process. Here you see my assistant, ready to start preparing Pasta Pizza Pie. 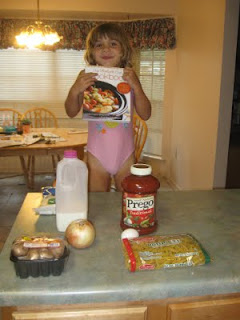 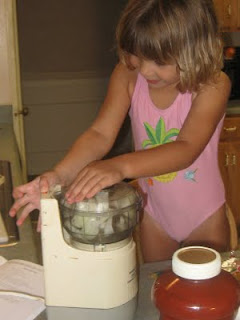 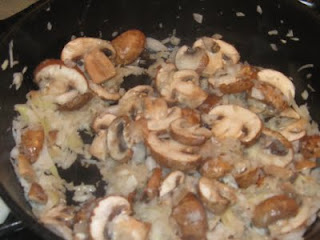 We put the pasta on to boil and then started cooking the topping. 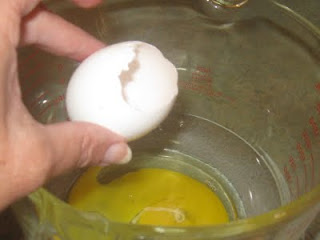 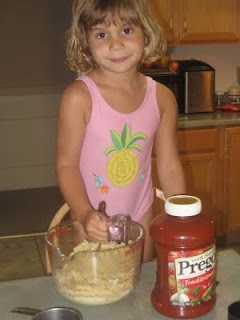 After breaking the egg in good Catholic school mom style (leaving at least 75% of the shell intact so that it can be donated to the school fair, where someone with far more time and patience than I have can stuff it with confetti so the kids can buy them to break over each other's heads) and adding the other crust ingredients, my young one gets to stir the crust ingredients. 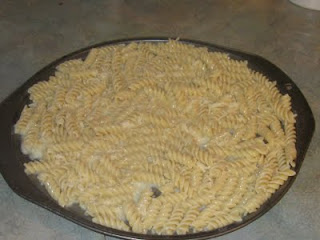 Here is what the crust looked like before it went into the oven. 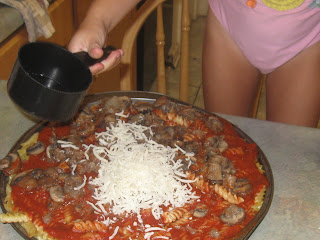 After the crust cooked, we added the toppings before baking again. 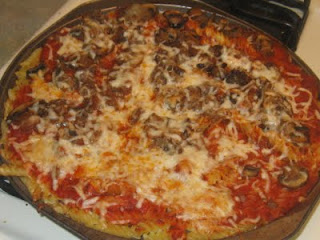 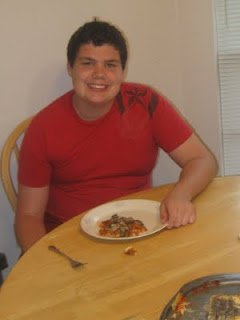 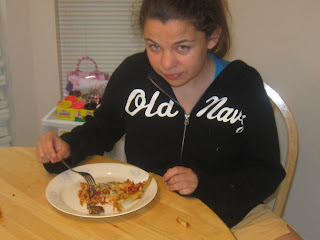 What do you think my big ones think?
My thoughts: I thought this tasted good, but was far more trouble than it was worth. Some of the pasta crust was a little crunchy and the dish would have pretty much tasted the same if I boiled the pasta and served the toppings on top, which would have cut prep time from close to an hour to about 30 minutes.
My kids' thoughts: My son ate it and said it was "okay", but that I shouldn't make it again. My girls picked though the toppings and when they couldn't easily remove what they didn't like, ate the pasta that I boiled but didn't use in the recipe.
Book Review: The Potluck Club Cookbook is filled with church/school cookbook favorites. It even includes the ever famous Elephant Stew that serves 3500 people, and to which you can add two hares if unexpected company arrives (but not many people like hare in their food). The old favorites I recognize include Layered Salad made with, among other things, lettuce, peas and bacon; Pigs in a Blanket made with hot dogs and crescent rolls; Forgotten Chicken and Rice, made with cream of celery soup, rice, and onion soup mix; and Oreo Cookies and Pudding Delight, made with Oreos, cream cheese, Cool Whip and Pistaschio pudding mix. You aren't likely to find a recipe calling for a spice not in your cabinet or a gadget you don't already own. Most have short ingredient lists and are simple to prepare. This isn't gourmet cooking; this is the stuff your kids will eat. There is a crockpot section and plenty of desserts. While it lacks pictures, it does include commentary from the authors not only about the recipes in this book,but also about the Potluck Club characters and books.
To Purchase from Amazon: Potluck Club Cookbook, The: Easy Recipes to Enjoy with Family and Friends

Available September 2009 at your favorite bookseller from Revell, a division of Baker Publishing Group
Posted by RAnn at 12:35 AM