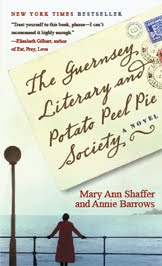 is probably the best book I've read all year. It is certainly the most popular on Amazon.com. Someone I used to try to avoid gave it to me--but I learned years ago that his bark was worse than his bite and he really is a nice guy (just in case he happens to see this).
Set in 1946, the year after World War II ended, the book features a writer, Juliet Ashton. Juliet is in her early 30's and spent the War years writing a newspaper column called "Izzy Biggerstaff Goes to War". Now that the War is over, her columns were collected into a book and published by her friend Sidney, who is a big-time publisher. It was before the days of blog tours so we read the letters Juliet wrote while she was travelling around England on book signing tours. The whole book is written in the form of letters, generally to or from Juliet, but sometimes those dear to her. One day Juliet gets a letter from a man on the island of Guernsey, which is in the English channel. From him she learns of a literary society formed while the Germans occupied the island. Despite working for the newspaper, she knew next to nothing about the occupation of the island and asked if he would get members of his society to write to her. They do, and after reading their letters, she decides her next book will be about the occupation, and she heads to Guernsey to meet the people and do more research.
At under 300 pages, it isn't a long book and it reaches beyond the categories into which we usually divide books. It is historical fiction, and while history forms the backdrop, the book is more about the characters than about that particular time. Juliet has a love life, but the book isn't a standard romance or historical romance. The only thing in the book that I can think of that might be offensive to anyone would be that two characters are named as homosexuals--but they are not a couple, nor do we hear of their sex lives. It is a book that deals with wartime and like true wartime, people lose their lives but in general, it has a happy ending. The writing is beautiful, the characters well-drawn and the descriptions of the island make me want to go there. Do yourself a big favor, read this book.
To purchase from Amazon: The Guernsey Literary and Potato Peel Pie Society (Random House Reader's Circle)