Tiber River Review: The Death of a Pope 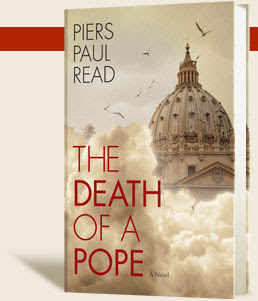 My latest read for Tiber River Reviews is a thriller, The Death of a Pope. Set around the time of the death of Pope John Paul II, it is the story of Kate, a young English journalist from a wealthy family and Juan, an ex-priest who has dedicated his life to serving the poorest of the poor. They meet when Kate is covering Juan's trial for terrorism--he was caught trying to obtain some Sarin nerve gas. Since he was being tried for planning to use it on humans and the defense told how he was going to use it on animals, he was acquitted. Shortly thereafter he and Kate meet. He shows her his work in Africa which greatly touches her. I won't tell you anything more about the plot other than to say it is a thriller.

I don't read a lot of thrillers so I don't have much to which to compare it, but I enjoyed it, and at the end was sitting on the edge of my chair.

The book was published by Ignatius Press, which is a Catholic publisher. I've read that a lot of Catholic publishers won't look at fiction, so I'm glad Ignatius decided to go with this one. Within the context of this thriller, the author is able to explain why the Church teaches as it does regarding the use of condoms in cases of AIDS. The book addresses several of the "hot button" issues in the Church. The liberal positions are given a positive spin, but by the end of the book you have to wonder in exactly what the liberals have faith.
Posted by RAnn at 2:05 PM