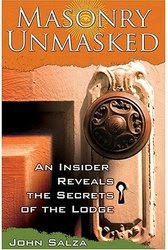 Okay, I'm nosey, I'll admit it. Tell me that something is a secret, and I want to know it, even if I really don't care about it. That was kind of my attitude when I saw Masonry Unmasked offered by The Catholic Company's Review Program. The fraternity handbook was now made public, and I wanted to read it, even though I figured that the secrets would be little more than secret handshakes or symbols, passwords or other foolishness designed to make some insiders and the rest of the world, outsiders. To that extent, I was not disappointed in the book. The author, a Catholic who used to be a Mason, told us about their initiation rituals, handshakes, oaths and passwords. However, that's not really the main focus of this book.

John Salza's main thesis is that no Christian, especially no Catholic Christian, should be a Mason. His reason? According to him (and the book is extensively footnoted), Masonry isn't just a social club, it is a religion, a religion that is not compatible with Christianity. Salza takes a look at the beliefs of Masonry as expressed in their rituals and writings and compares them to Catholicism (and again he footnotes his sources regarding Masonry and quotes the Catechism of the Catholic Church) and concludes that Masonry sees all world religions as equal, denies the need for Christ and teaches that Masons earn their salvation totally by their own efforts. Further, he points out that initiates are not given the tenets of Masonry prior to the initiation ceremony so that they are able to review and reflect upon them; rather those beliefs are revealed at the ceremony, while the initiate is in a vulnerable situation, and he is asked to swear an oath to accept the beliefs and keep the secrets.

In addressing the topic of why many Christians are Masons, Salza points out that many join for the fellowship, social and business opportunities. The only ceremonies they observe and the few in which they participate; hence they have only a rudimentary idea of the beliefs of the lodge, which I'd sum up as "American civil religion", namely believe in God (as you understand Him) and do good and let me do the same. Though they swore an oath by God, they don't really consider the ramifications.

While some of the review of Masonic beliefs and Salza's comparisons of them to Catholicism got a little tedious, this was an interesting book about a group that plays an important part in many American communities (and it was kind of fun learning about their "secret" handshakes).

To purchase this book, click here.
Posted by RAnn at 9:38 PM