Thank God for Our Armed Services 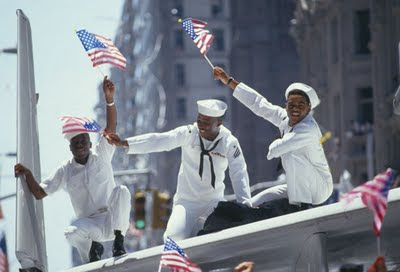 Above is another picture of Visions of America. For some reason when I saw this I thought of those parades in Moscow that they used to show on TV years ago. Long lines of uniformed soldiers would march, and be followed by some sort of military hardware. What a different image is portrayed by these sailors. They are celebrating freedom with those they protect; not showing off to those they subjugate. New Orleans is a city of parades and we have military units in many of them. Some are people marching in straight lines; but really very few. Instead, we get the steel band playing as they ride, or riding on floats with their kids. Our military is FOR us; not against us and that is one more reason I thank God for them and this wonderful country.